In the half-hour special Mirror Magic, Pinkie becomes trapped with her friends in limbo when Juniper Montage acquires a hand mirror enchanted with Equestrian magic. When Starlight Glimmer succeeds in convincing Juniper to let them out, Pinkie and the rest of her friends forgive and accept Juniper as a new friend, Pinkie jokingly remarking that they are “a really forgiving group”.

In Spring Breakdown, Pinkie Pie goes on a cruise trip with her friends for spring break. She expresses interest in a gourmet cake served at the ship’s buffet, but because of Rainbow Dash’s obsession with finding Equestrian magic, the chef Puffed Pastry bans her from the buffet. Later, when the ship is sinking, Pinkie Pie saves Puffed Pastry when she is trapped inside the flooding buffet room.

Pinkie serves as the secondary or main focus of the Summertime Shorts Steps of Pep, in which she brings her cheerleading to various CHS clubs and activities The Art of Friendship, in which she tries thinking of what to paint in art class The Canterlot Movie Club, in which she loses her plush Gummy doll in the movie theater and Coinky-Dink World, in which she works as a waitress in the Sweet Snacks CafÃ©. 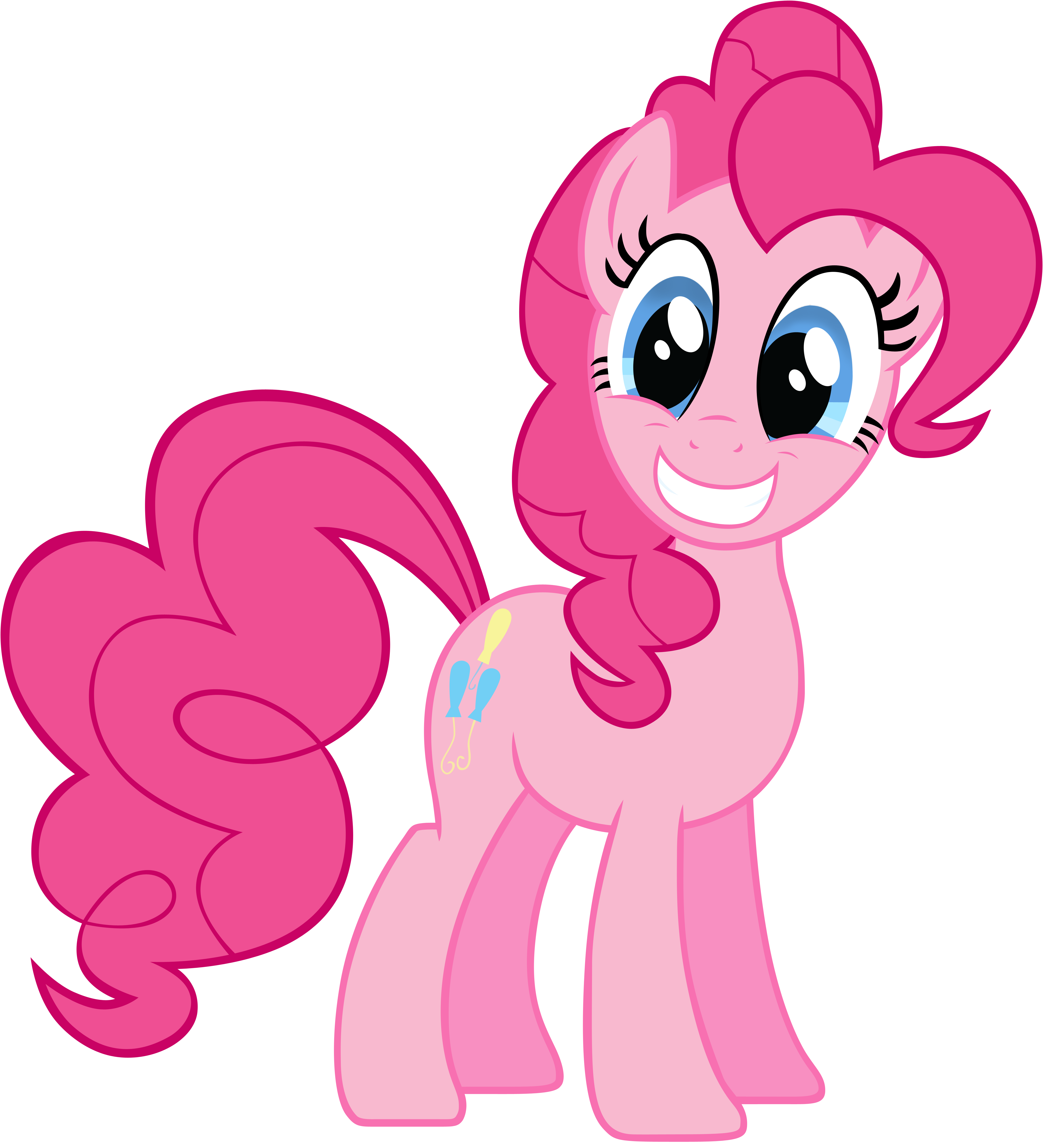 Pinkie briefly appears in the sequel My Little Pony Equestria Girls: Rainbow Rocks at Twilight’s castle, where she hears the legend of the sirens. Through Pinkie’s musings, Twilight gets the idea to transfer the magic of Princess Celestia’s book into the Crystal Mirror.

In Spring Breakdown, Pinkie Pie makes a brief appearance bringing treats to the Castle of Friendship for Sunset Shimmer and humans-turned-ponies Sci-Twi and Rainbow Dash.

Pinkie Pie appears again in My Little Pony Equestria Girls: Friendship Games, competing in the games against Crystal Prep Academy as part of Canterlot High’s Wondercolts team. She participates in the Academic Decathlon, winning the baking contest after creating a replica of the Mona Lisa inside a giant cake. She is paired up with Rarity during the speedskating portion of the Tri-Cross Relay, beating Sunny Flare and Lemon Zest.

Pinkie Pie is the first of her friends to realize that the Twilight Sparkle they meet during the Friendship Games is from the human world and not Equestria. She helps break the ice between Canterlot High School and Crystal Prep Academy by livening up the school’s tense welcoming party. Her joy at seeing the two rival schools mingling causes her to pony up, but her magic is inadvertently drained by Twilight’s magic-detecting device. She later regains her magic to empower Sunset Shimmer and return Twilight to normal after she transforms into Midnight Sparkle.

Pinkie Pie was reintroduced in the Friendship Is Magic Boxed Set with Princess Celestia, Twilight Sparkle, Spike the Dragon and Applejack. These characters had molded hair.

Join PRINCESS CELESTIA, along with TWILIGHT SPARKLE, SPIKE THE DRAGON, APPLEJACK and PINKIE PIE as they discover the magic of friendship together!

Soft little PINKIE PIE doll needs your love and care! Hold her hands while she learns how to walk!Look, I can walk! is what your PINKIE PIE pony will say to you when you hold her hands and help her learn to walk. And when shes hungry, you might hear her say, More, please! She will pretend to eat from her spoon and bowl or pretend to drink from her bottle. If she doesnt seem hungry, try giving your pony her pacifier instead. Walking, talking, snuggling and eating its a busy day for you and your SO SOFT PINKIE PIE LEARNS TO WALK pony. Imagine all the fun you can have again tomorrow!Includes pony doll, bottle, pacifier, bowl and spoon.Includes 3 AA batteries.Ages 3 and up.

This release comes with a suitcase and pet. According to the Hasbro website, it also supposedly comes with a DVD.

It’s time to celebrate the royal wedding of PRINCESS CADANCE and SHINING ARMOR! The bride knows she can count on PINKIE PIE to help make her wedding lots of fun! Is any pony ready for some cake? No one brings more excitement to a happy event than your PINKIE PIE figure! She can’t wait to help you celebrate. Help her into her fancy outfit and arrange her hair just right. There’s a magical adventure in store for you, and your PINKIE PIE pony is the perfect friend to share it. -hasbro.com

Cross My Heart Hope To Fly

As she makes her deliveries, Pinkie Pie briefly runs into Fluttershy, who asks her to bring snacks to the castle later for Shining Armor and Cadance’s visit. Pinkie agrees and sets about making her deliveries as quickly as possible, all while avoiding her friends. She feels awful for ignoring and keeping secrets from them, but she would be unable to live with the guilt of ruining the surprise.

Pinkie finds herself having more Pinkie Promises to fulfill…

After finishing her deliveries, Pinkie believes she is done socializing with other ponies until the next day, but she finds a list of other Pinkie Promises she recently made that she has yet to carry out.

…and finds herself more and more difficult to keep the secret to herself.

Over the course of the afternoon, Pinkie Pie makes balloon animals for the Ponyville Schoolhouse foals, helps Mayor Mare sort her file cabinets at Town Hall, and helps a store owner advertise his store. During each task, Pinkie is constantly surrounded by reminders of the secret she’s keeping, making it all the more difficult to keep.

Welcome to the world of My Little Pony, a place filled with the magic of friendship. With pony friends, discover Cutie Mark Magic and imagine exciting adventures together. Imagine Pinkie Pie scooting and beeping all over Ponyville. Includes PInkie Pie pony figure and My Little Pony Pinkie Pie Remote Control Scooter.

Teacher For A Day Description

Pinkie Pie keeps her pony friends laughing and smiling all day! She believes every day is worth celebrating, and loves to throw parties with her pony friends. The only thing Pinkie Pie loves as much as her friends and parties are sweets. She loves to visit the Sugarcube sweet shop. She is always positive, and always helps the ponies see the bright side. You can count on Pinkie Pie for lots and lots of fun.

If there’s one thing Pinkie Pie loves more than planning parties, it’s laughing! Hear Pinkie Pie laugh with this ticklish figure that’s fun and silly like her character in entertainment. When kids tickle Oh My Giggles Pinkie Pie toy, she starts to giggle, wiggle, and laugh! Tickle her chest to hear Pinkie Pie giggle — the more she is tickled, the harder she laughs and faster she moves! Sounds and movement can also be activated by light sensor in figure’s mouth.

The Elements Of Harmony Guidebook 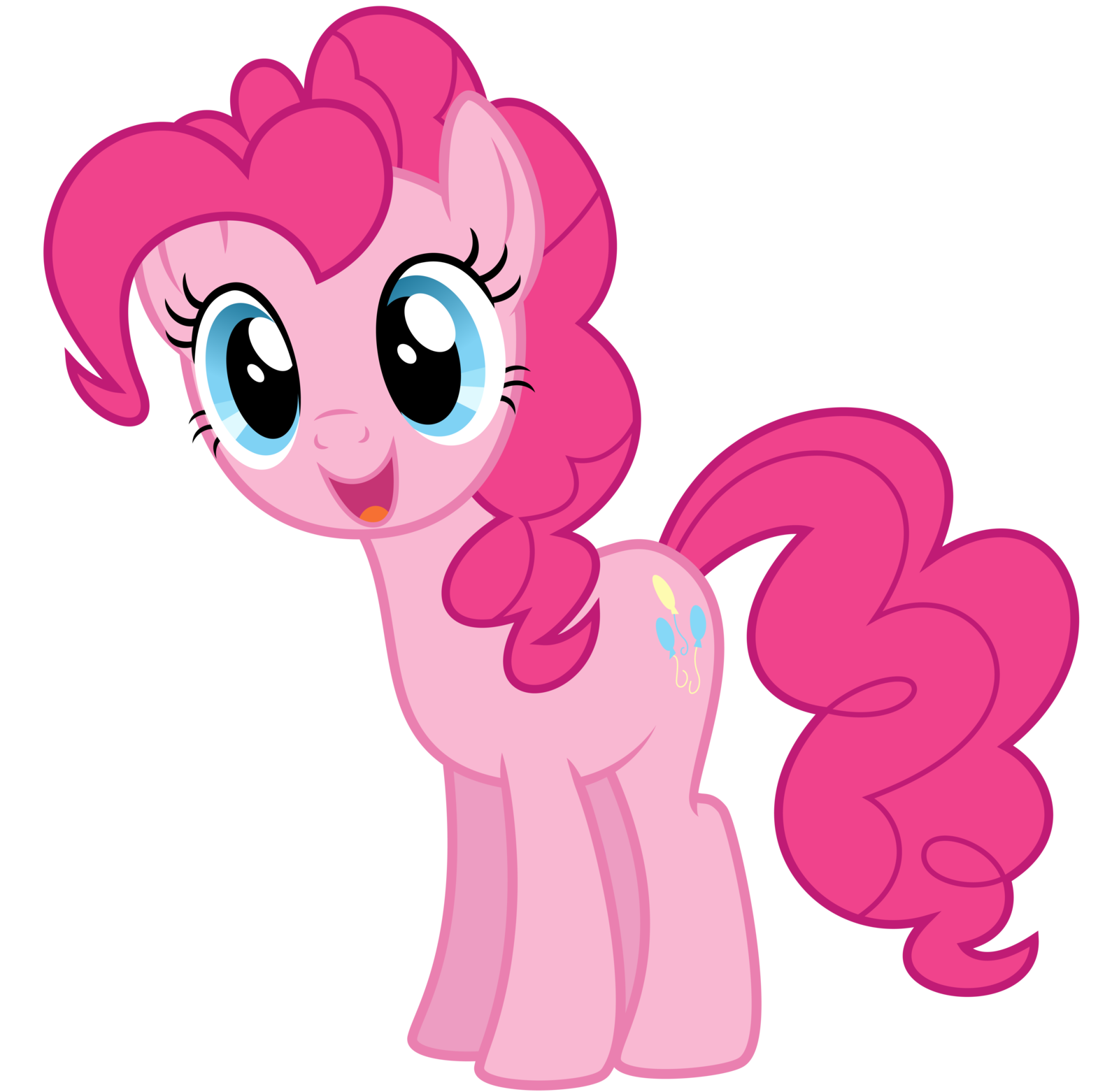 Giggly, playful, and super girly, it’s not unusual to find PINKIE PIE prancing and skipping blissfully through the streets of Ponyville. The silliest pony around, Pinkie Pie has a desire to entertain that makes her the most likely source for humor. She is a free spirit, often acting on her whims and following her heart. You would never guess she grew up on a dreary rock farm. Eager to amuse her friends and make everyone happy, Pinkie Pie will find any excuse to throw a party. She loves eating sweets and baking them so much that she is often found at the Sweet Shoppe in Sugarcube Corner, where she works, and lives in the apartment upstairs.

Need a power-packed dose of peppy positivity? Pinkie Pie has everypony covered! Her giggle is infectious and so is her unstoppable spirit. Anypony who hangs around her long enough is bound to get caught up in her infectious spirit. When she’s not slinging sugar at Sugarcube Corner, she’s planning parties for all her besties. Who doesn’t love parties? Pinkie is also an excellent talker with the gift of gab. Speaking of gifts, she loves to give them! What else is she supposed to do with that big heart? Pinkie loves having friends but is extra thankful to be included in such a wonderful group of inspiring young ponies. Hooray for friendship!

Pinkie serves as the secondary focus of the special Sunset’s Backstage Pass, in which she and Sunset Shimmer are excited to see their favorite band PostCrush at the Starswirled Music Festival. However, Pinkie gets distracted by the festival’s other activities and accidentally gets herself and Sunset banned. When Equestrian magic traps Sunset in a time loop, she and Pinkie trace the cause of the time loop to an artifact called the Time Twirler, which Kiwi Lollipop and Supernova Zap of PostCrush use to repeat the day until their concert is perfect. Sunset and Pinkie ultimately destroy the Time Twirler and succeed in breaking the time loop.

Depiction In My Little Pony The Movie

In My Little Pony The Movie, Pinkie Pie is in charge of cake baking for the Festival of Friendship in Canterlot. When the city is invaded by the Storm King‘s forces, led by Tempest Shadow, Pinkie and her friends escape to seek out the “Queen of the Hippos”later specified to be Queen Novo of the Hippogriffsfor help. During their journey, they are nearly sold into slavery by Capper and thrown overboard Captain Celaeno‘s airship. In the underwater kingdom of Seaquestria, Pinkie befriends Princess Skystar and leads her friends’ effort to convince Novo to help them save their home from the Storm King, but Twilight’s attempted theft of Novo’s Pearl of Transformation gets them banished from Seaquestria.

Pinkie and her friends have a falling-out with Twilight over her actions, but theyalong with other friends they made during their journeyreturn to Canterlot to rescue her when she gets captured by Tempest. After sneaking into the city and fighting past the Storm King’s forces during which she defeats a Storm Guard by throwing cupcakes at him, the Mane Six reunite and make amends, and they eventually succeed in defeating the Storm King. In the end, the Friendship Festival resumes, and Pinkie and her friends befriend Tempest.

Pinkie Pie appears at the beginning of A New Generation as part of an imagination sequence with Sunny Starscout‘s figurines.

In My Little Pony Equestria Girls, Pinkie Pie accompanies Twilight to her first princess summit in the Crystal Empire, and she witnesses Sunset Shimmer steal Twilight’s crown. In an alternate world, Pinkie’s human counterpart appears as a high school student. At the end of the film, she accurately guesses the details of Twilight’s relationship with Flash Sentry on “a hunch.”

In Forgotten Friendship, Pinkie Pie and her friends are members of the Canterlot High Yearbook Club. Along with the rest of the school, her good memories of Sunset Shimmer are erased by Wallflower Blush using the Memory Stone, causing her to forget her friendship with Sunset and only remember her as a bully. Accordingly, the girls act with hostility towards Sunset for much of the special while enjoying their friendships with each other. After seeing Sunset jump in front of a blast from the Memory Stone intended to erase their memories of high school, the Equestria Girls use their geode powers to destroy the Memory Stone and restore the school’s memories. Pinkie and her friends later win the “Best Friends” yearbook superlative.