How To Make Pie Crust

How to Make Best Gluten Free Pie Crust Ever

Though 7 steps may feel daunting, know that each step is super manageable, and you can totally do this! Heres how youll bring this GF pie crust together:

Bakers, start your ovens! Fall is what I consider to be the beginning of pie season. The temperatures start to drop, crisp apples and pears fill the produce shelves and a freshly baked pie seems to be the perfect way to cozy-up a chilly evening. And before you know it we launch into Thanksgiving and the beginning of Holiday Season. I ask you what is Thanksgiving without pumpkin pie?

For many years after converting to a gluten free diet I made crust-less pies and was perfectly happy. After all a crust-less pie you can safely eat is better than a pie with crust you cant! But as time went by, I started to resent my crust-less life and started using nuts and gluten-free cookies as a base for my pies. Nothing wrong with that and in fact in some cases, such as my chocolate peanut butter pie, a nut crust is the ideal choice. But what was missing for me was the OTHER choice a white, flaky, traditional pie crust just like Grandma used to make but without the gluten. So I embarked on a mission to make the perfect gluten free pie crust. The first thing I learned is you cant let pie crusts intimidate you. It is not only possible to make a great gluten-free pie crust, it is completely do-able and many of those who have tried mine, say they prefer my gluten-free crust to regular wheat crusts they have had.

How Do You Make Your Pie Crust Extra Flaky

There are two main aspects of this recipe that make the pie crust extra flaky: keeping the butter pieces large and lamination.

You want to squish each cube of cold butter between your fingers to form a small sheets of butter. During rolling and laminating, these sheets of butter flatten out even further and help create all those butter-dough layers that lead to flakiness.

How Can You Use Gluten Free Pie Dough

You can use this dough in any pie, tart or galette recipe. The dough makes enough for one 9-inch double crust pie, or 2 single crust pies . Whether it’s your favorite berry pie or a savory egg quiche, this crust won’t let you down. Don’t miss my easy strawberry galette recipe, my cinnamon and vanilla spiced apple galette and my savory spinach galette! 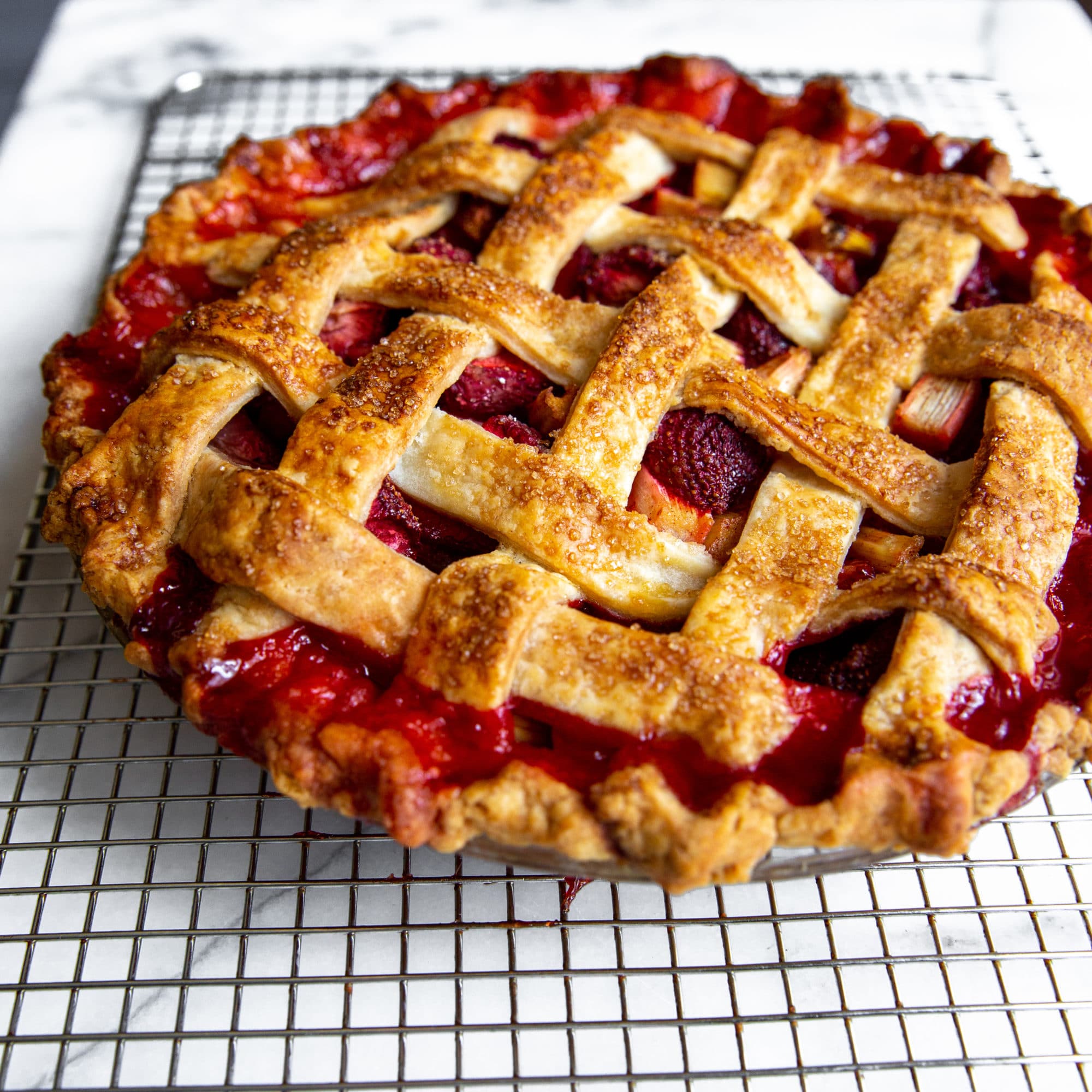 This gluten free pie crust recipe is an all purpose pie dough for both savory and sweet pies. It comes together quickly in either a food processor or in a stand mixer and uses a 1-1 gluten-free flour blend.

For so long I had been trying to make gluten-free pie pastry the same method that I make wheat flour pastry, and it made the gluten free version so difficult to work with. Then I started treating the gluten-free dough differently and had amazing results that created fuss free pie dough that also tastes great. Honestly, making gluten free dough is so much easier than the traditional pie dough!

I’ve included more tips in the recipe below for rolling out the dough and for making both single- and double-crust pies. Here’s to a season of fearless, delicious pie baking!

Why This Gluten Free Pie Crust Is Different

My basic principles of flaky pastry-making remain the same. Begin with relatively large chunks of butter , coat them in dry ingredients and then flatten them between your thumb and forefinger.

That way, when the butter melts a bit as youre working with the pastry, it will firm back up when you chill the shaped pastry. This time, though, rather than using ice water to bring the dough together, its sour cream. Sour cream adds a tenderness to the dough that is like nothing else.

Be sure to lift the pie crust up and into the bottom and sides of the pie plate rather than attempting to stretch it. Thatll keep it from shrinking during baking.

If youre a visual learner, Ive created a how-to video to help show every stage of pie-crust making. Its right above the recipe itself.

Ive included instructions for parbaking the crust, but your gluten free pie recipe may or may not require that step. Extra tender and extra flaky?

Thats right. Thank you, sour cream! Whether youre already planning your gluten free Thanksgiving, or still baking up the best of summers stone fruits, you can fill this gorgeous crust with all your favorites.

Is This Recipe Low Carb / Keto

If you are looking for a low carb or keto almond flour pie crust recipe, simply omit the sugar or replace it with a low carb sweetener.

Replace the sugar with sweeteners such as monk fruit, erythritol, splenda, or coconut sugar for a paleo crust. Make sure the sugar substitute is granulated rather than liquid so the dough doesnt become too wet.

Whats The Best Gluten Free Flour To Use For This Recipe

When you head to the grocery store, youre looking for a gluten-free cup to cup or all-purpose flour blend. These flours are a mixture of gluten-free flours and starches. I wish it was as easy as that, but even those mixtures have some pretty big disparities. We tested this recipe with six different brands of gluten-free flour, and here are the results:

This is the absolute BEST ever gluten free pie crust! So flaky and light, youd never know it was gluten free!! Make it today for any of your pie needs!

I have been baking pies for years. Theres something about rolling out pastry that is so calming and therapeutic to me. When I became gluten free, I truly thought those days were over. Then I started getting a little more experienced with the whole gluten free baking thing and tried my hand at making a gluten free pie crust. It was a disaster! The crust was so hard we couldnt even cut it with a knife.

Fast forward a few years, I have finally created the BEST gluten free pie crust ever!! It rolls out beautifully, maybe better than regular pie crust. It doesnt break apart constantly and doesnt stick, and it bakes up so flaky, its almost like a rough puff pastry! You seriously will have a hard time believing its gluten free

Best Tips For Rolling Out Gluten

Tips For A Successful Gluten

Does the thought of creating a gluten-free pie crust from scratch intimidate you? It shouldnt. Making an allergy-friendly pie crust isnt difficult. Yes, you use a different set of ingredients but the methodology is pretty much the same and the results are just as tasty and well worth the effort. Here are some gluten-free pie crust recipe tips appropriate for any food allergy, preference, or intolerance.

Because gluten-free dough can dry out, making it more difficult to work with, weve included some steps to ensure your gluten-free crust is as flaky and delicious as possible. Be sure to read these first!

Dont over-mix ingredients. The less the gluten-free dough is worked, the more tender the crust.

To roll out the gluten-free dough, dust your work surface thoroughly with gluten-free flour and use a well-floured rolling pin to prevent the dough from sticking. Another option: Roll the dough between two generous pieces of wax paper. This simplifies clean up.

If you roll the gluten-free dough out on a floured surface, transfer the dough onto the pie pan by rolling it onto the rolling pin first. Then place the rolling pin on the edge of your pie pan and unravel the dough. Press the dough gently into place and trim the edges to fit.

Make A Single Or Double

This recipe makes a 2 pie crusts, enough for 2 single-crust pies or 1 double-crust pie.

You can use this pie crust in any recipe that calls for pie crust. Keep in mind that I have only baked this pie crust at 375 degrees and dont know how it will perform at other temperatures, though Im confident it will do well.

One tip I love to share: if youre going to be making a chocolate cream pie, sprinkle a handful of milk chocolate chips on the crust as soon as it comes out of the oven.

Allow the chocolate chips to melt, then use a pastry brush to spread them into a layer of chocolate on the bottom and up the sides. Cool completely and allow the chocolate to harden before filling with chocolate pudding this will create a barrier that will keep the crust from getting soggy, and add another element of flavor and texture to your pie!

I recommend milk chocolate chips, if you use a darker variety the chocolate layer will be harder to cut through.

This easy poke cake recipe is perfect for a quick dessert. And since its so simple, you can easily make adjustments to the recipe to suit your needs.

Why is my gluten free pie crust so hard? If you chilled your pie crust without rolling it thin, youll notice that the dough has become extremely hard. The combination of dry gluten free flour and cold butter will cause the dough to become so hard that its difficult to roll out. If that happens to your dough, let the dough sit at room temperature for five to 10 minutes to soften it. Then, you can roll the dough thin.

Or make sure the dough doesnt harden in the first place, by following my advice and rolling your dough thin before you chill it. If you use this preperation method, you wont have to worry about your dough being too hard to roll out!

And if your dough is too hard after baking, its probably because it was overcooked. Keep an eye on your pie crust as its baking to ensure its not getting too brown. The longer your gluten free pie cooks, the crispier the crust will become.