Take pie crust out of package, but make sure to keep it inside the foil. Do not turn it upside down or attempt to take it out. Or, it will get crumbled and destroyed.The crust is very crumbly. Be careful.

Add half and half to the medium bowl. Then add both packages of instant chocolate pudding. Using a whisk, mix for 2 minutes until all mix is dissolved. Allow the pudding to sit in the fridge or freezer for 5 more minutes so that it thickens.Once the pudding is thick, take about ½ of the chocolate pudding mixture and spread it as a first layer. You will mix the remaining pudding will be mixed with Cool Whip to form the second layer.Work with the spatula to even out the first layerAdd ½ of the Cool Whip package to the remaining ½ of the chocolate pudding in the bowl.

Make sure to get a good amount of chocolate shavings as well as some chocolate dust.

This Easy No Bake Chocolate Cream Pie is done! Make sure to refrigerate it at least 4 hours . You can also freeze it for at least 1 hour before attempting to cut it!

What Are Some Great Topping Ideas For This No

Im all about adding whipped cream and mini chocolate chips to the top of this pie. Chocolate shavings are always a good idea as well.

If youre feeling adventurous, you can always drizzle the top with hot fudge or melted caramel, too. Lastly, adding some sliced bananas to the top could be your attempt at adding some health!

Why Is My Chocolate Cream Pie Runny

Using the corn starch and the egg yolks go a long way to making sure you have a nice, firm pie filling. But the way you cook your pudding is SUPER important. It really isnt too hard at all, it just takes your attention. A lot of times, a runny pie happens because you didnt cook it long enough. Youll want to really watch your saucepan and cook until your ingredients bubbles in the middle. But youll also need to be continuously stirring so you dont overcook the filling or scramble the eggs.

Do you love no bake pies? Try these awesome recipes 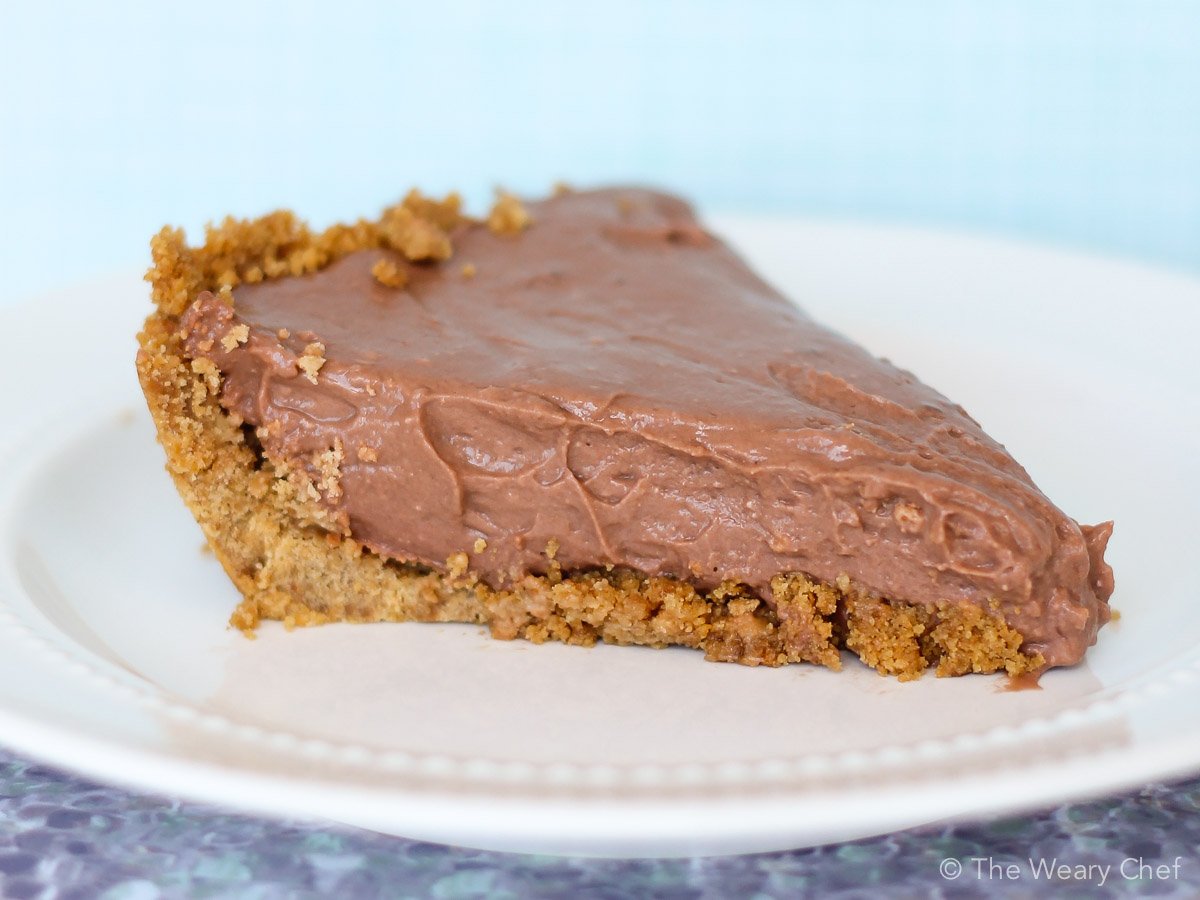 There are a variety of different crusts you can use for your chocolate pudding pie, but I personally love this pie with a simple graham cracker crust. Making homemade graham cracker pie crust is super easy and I much prefer do-it-yourself to store-bought graham cracker crusts. It only takes a matter of minutes to make and has the perfect buttery crumble. You only need three ingredients for this crust graham cracker crumbs , melted butter and granulated sugar.

To make the crust, simply combine the graham cracker crumbs, melted butter and sugar in a medium bowl. Stir the mixture together until well combined. Press this mixture into your pie plate, making sure to firmly press it into an even layer on the bottom and around the sides. I like to use the bottom of a glass cup or measuring cup to help press the crust into the bottom of the pie plate to make sure it is tightly packed.

Published: · by Kim Lange · This post may contain affiliate links ·

This chocolate cream pie is inviting for any time of year, but it’s especially uplifting in the summertime when youre looking for a no-bake chocolate pie recipe and no fuss!

The hard part is figuring out what pie crust to pick. Pre-made oreo, nilla or graham cracker and pastry crusts are definitely fuss-free and saves time, but conjure up your favorite crust if you prefer to make your own and just add the filling, etc and you’re good to go.

For a frozen version, I would recommend using an Oreo crust or any kind of cookie crust, instead of pastry. Let it thaw for 15 minutes, then dig in on hot sunny days!

The creamy milk chocolate filling is so lush and light and it holds together so well, without falling apart. That’s the worst sinking feeling when you’ve waited for your pudding to set up when you cut into the pie and ker-plop!

UGH! You still eat it, because it’s chocolate pudding pie for God’s sakes, but dang it!!

Ingredients Needed For This Pie Recipe

Jessie Oleson drops by every Monday to share a delicious dessert recipe. The Mgmt.

Topping the list of things I’ll never do again? Preparing instant pudding pie filling with cold milk. Why? Because as it turns out, it’s far more delicious when you make it with melted ice cream.

And when you make it chocolate on both counts , you’ll be rewarded with possibly the most luxuriant chocolate cream pie filling you’ve ever tasted. The thick, velvety chocolate mixture falls somewhere between pudding pop and mousse in texture, which is so deeply, darkly, completely chocolaty in flavor that you won’t want the slice to stop.

Note: As for the pie crust, the style used is up to you. I used a traditional butter pie crust, but you could easily swap it out for a graham cracker or cookie crust if desired.

Can You Freeze Pudding Pie

You can. If you want to save this pie for later, you can add it to your freezer in a freezer-safe storage container. When youre ready to eat, just place it in the fridge or on the counter to let it unthaw before cutting. Or enjoy frozen for a frozen summer treat! I think that freezing this chocolate cream pie with pudding sounds divine!

Im a huge fan of pudding pies. I was a bit skeptical at first but after I made my first one, I knew that these creamy pies were a game-changer in the kitchen. I tend to make these pies using a premade crust during the spring and summer months because they have a wonderful flavor, are easy to bake, and no-fail!

This pie would be the perfect addition to your Easter dinner or summer fun family BBQ as well. Theres just something about a chocolate dessert that makes everyone happy instantly.

This simple no-bake chocolate pie will have you loving how fast youll be cutting into your very first piece.

Please ignore the instructions on the label of the pudding mix. My Instant Chocolate Pudding Mix Jell-O package called for 2 cups of milk per box of pudding mix. This would make it 4 cups for both boxes. But we are not going to be adding this much liquid at all. In this recipe, we add a total of 2 cups of half and half to two packages of Instant Chocolate Jell-O pudding mix. Each package is 3.4 oz.

Using half and half instead of milk will add more fat into the mixture. It will also make the pudding structure firmer and more stable. Thats exactly what we need for the layers to be nice and distinct. Using half and half will also help create a nice thick bottom layer and very soft smooth middle layer. 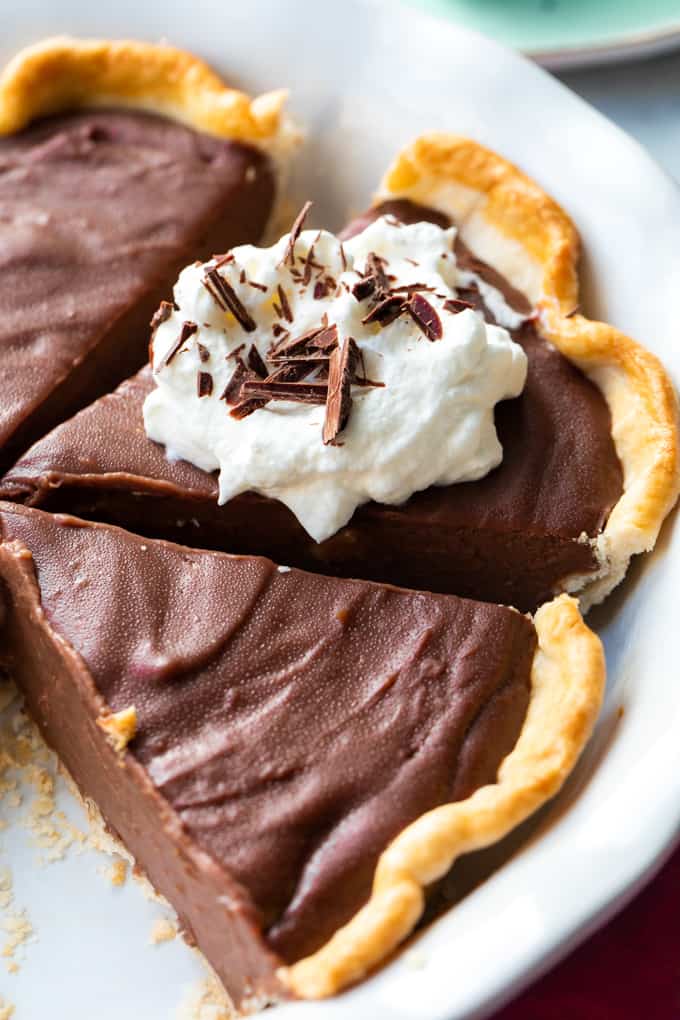 The ingredients for Chocolate Cream Pie can be all convenience, all homemade, or a combination of the two as you can see in my photo below.

For this recipe you will need:

You May Like: Why Bake Apple Pie In A Paper Bag

Pie season is here and we cant get enough of this No Bake Chocolate Cream Pie! Its so easy to make and tastes amazing!

If youre like us and cant get enough pie, this should definitely be on your must make list! Homemade pie goes right along with holiday entertaining and this pie is always a crowd favorite.

Growing up my mom always made the best chocolate pie! I remember looking forward to it and loving it so much.

When I grew up and realized that the pie came together in minutes and was super deliciousI was totally hooked.

A crisp pie shell is filled with a chocolate packed and creamy filling. I love adding whipped topping and chocolate curls for some added drama.

So For The Filling Its Just 4 Ingredients

For the instant pudding we used Sonic Chocolate Shake Pudding being that it’s summer and it really does taste like a chocolate shake. There are other flavors like strawberry, banana and root beer, so you can have a lot of fun with incorporating these pudding flavors and change them up as desired.

My friend, Diana made these Sonic Strawberry Bundt Cakes with the Strawberry Shake flavor and they were delightful! You should give them a try. If you don’t have the mini bundt pans, make some cupcakes! Totally worth the YUM!

Milk and whipped cream make up the last 2 ingredients for the pudding filling! Top off the pie with some extra whipped cream and chocolate shavings for the extra yum factor!

Enjoy some Sonic at home!!

What Is Chocolate Pudding Pie

Chocolate pudding pie is an old-fashioned recipe that has been around for hundreds of years! Actually, make that thousands of years! According to foodtimeline.org the earliest print reference found for chocolate pudding is 1730. They go on to say that this type of pie was most often enjoyed by wealthy people. Fancy! Today, theres many different ways to make it, including from scratch, but I think the best way to make it is with a box of instant chocolate pudding mix because its SO easy.

My grandmas recipe simply involves mixing up the chocolate pudding, pouring it into a graham cracker crust and topping it with whipped cream . I elevated her chocolate pudding pie recipe to include an extra layer a decadent, delicious cheesecake layer. Yes, please!

If youve never made or tried a chocolate pudding pie, please do so VERY soon. Add it to your Thanksgiving dessert menu! It would be a great alternative to pumpkin pie. Or make it to enjoy after Christmas dinner. Since its a no-bake recipe, it doesnt compete for precious oven space, plus you can make it a day or so ahead of time and let it chill in the fridge. Its also just a great any time treat!

With a combination of cheesecake filling and creamy pudding piled into a sweet, buttery graham cracker crust, this layered chocolate pie is the cure for many things including holiday blues, PMS, homesickness, lovesickness, and is a total hit with almost everyone that tries it!