How To Make Apple Pie From Scratch Easy Simple

First, roll out the dough into a 12-inch circle. Before rolling, add some flour to your rolling surface and the rolling pin, so the dough doesnt stick to it.

Line a greased pie dish with the rolled out bottom crust. Prick the dough in several places with a fork.

Add the apple pie filling to the pie.

Roll out the 2nd dough disk into the top crust and cover the apple pie.

Pinch the edges of the top and bottom crust together to seal the pie.

Brust the top of the apple pie with a whisked egg.

Cut the slits in the top crust of the apple pie. They will allow steam to escape when the apple pie is baking.

Bake the apple pie in pre-heated 375F oven for 40 minutes. Let cool for 15 min before slicing and serving.

If the crust looks like it’s getting too browned, take a large piece of aluminum foil and place on top of the pie in the oven. No need to wrap it around the pie, just place it on top. That will keep the top from browning further.

Pies always seem to take longer to cook than one expects. The filling should be visibly bubbling, which you should be able to see through the steam vents.

I recommend putting a rimmed baking sheet on a rack beneath the rack of the pie to catch the filling as some of it invariably bubbles up and out over the pie. Makes oven clean-up a lot easier.

How To Make Quick And Easy Apple Pie

Bring the pie crust to room temperature before you get started so that it’s easier to unroll without ripping.

For a quicker pie, use store-bought pie crust rather than homemade.

When pouring the reserved quarter cup of syrup into the pie shell, and over the lattice crust, you may need to tip the pie to help the syrup go in the holes if there is a bit too much.

Make sure the entire crust has a thin coating of the syrup to help seal it. This also helps the crust crisp up, too.

Let the pie cool completely before serving. I know, its so tempting to eat it warm with ice cream, but if you can, let it cool. This helps the apple pie set up better, which prevents the apples from coming out while slicing and serving the pie. 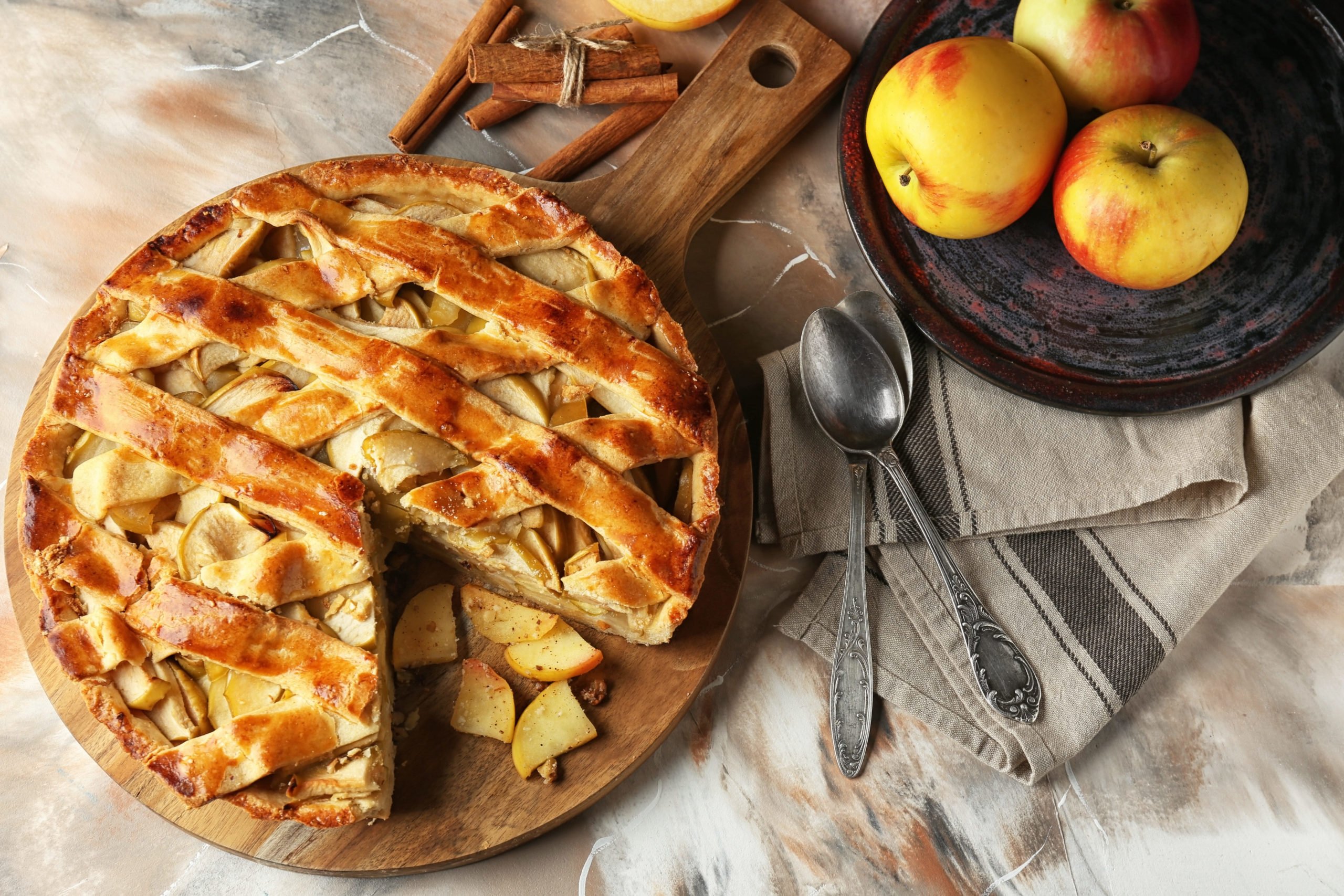 If youve ever seen an apple pie with a great big crevice in the center, this is an indication that not enough apples were used in the recipe. The culprit typically lies in using an allotted number of apples rather than going by weight. Apples come in all different sizes, and because a medium-sized apple is somewhat of a subjective description, youll want to take the time to weigh your apples.

How Do I Keep My Apple Pie From Getting Soggy

The sogginess is caused by the moisture from the fruit and juices not allowing the bottom crust to bake fully. To prevent this, use a technique called blind baking which simply means to bake the bottom crust slightly before filling it with fruit.

Line the pie plate with the pie dough. Add some pie weights on top to help the crust maintain its shape . Bake in the top third of your oven at 400°F for 15-20 minutes or until the edge starts to turn golden.

How To Make Apple Pie From Scratch

To make the best apple pie, youve got to start with a top-rated recipe, like this apple pie recipe from Maggie Greene, a reader in Granite Falls, Washington. Heres what youll need to make this pie.

What You Need for Homemade Pie Crust

Ingredients for the Apple Pie Filling

How To Freeze Apple Pie Filling

If you want to save your apple pie filling for a rainy day, let it cool and then put it in a gallon size ziplock bag. Then place the bag in the pie plate you intend to bake the pie in. Freeze in the pie plate. Once its frozen, you can put the pie plate back in your cupboard. This will make the apples freeze in the shape of your pie plate. Later, roll out your pie crust and add the frozen apples on top. You can bake it straight from frozen. Add about 20 minutes to the total bake time, and remember to cover your pie toward the end so it doesnt burn.

People often ask me what are the best apples for apple pie. What kind of apples do I use? Some people are dogmatic about what kind of apples they use and will only use baking apples, like Granny Smith apples for pies. Im not so fussy and I use whatever apples are on sale or that I happen to have on hand.

I personally dont like the super tart taste from baking apples and I always needed to add more sugar when I used them. It also seems to take longer to bake using baking apples.

My favorite thing to do with this easy apple pie recipe is to use a couple of different kinds of apples. Dont have a heart attack but, yes, I have used Delicious apples before.

Personally, I think the best apples to use for the best apple pie are Gala apples or Envy apples and they work perfectly with our easy apple pie recipe below. One of our viewers recently suggested using Pink Lady apples for apple pie, but I have not tried them yet.

How To Make Apple Pie:

How To Make Apple Pie Spice From Scratch

Because theres no one way to make apple pie spice, this is an opportunity for you to customize your own blend to suit your taste.

Start with a base blend of 3 or 4 tablespoons of cinnamon to 1 1/2 to 2 teaspoons of nutmeg, then build your personal apple pie spice using a combination of any of the following ground spices:

As for what to do with your apple pie spice blend , how about apple pie-inspired granola bars or stuffed scones, or one of these ideas for using apple pie spice, which include oatmeal, coffee, whipped cream, and more?

How To Freeze An Entire Apple Pie 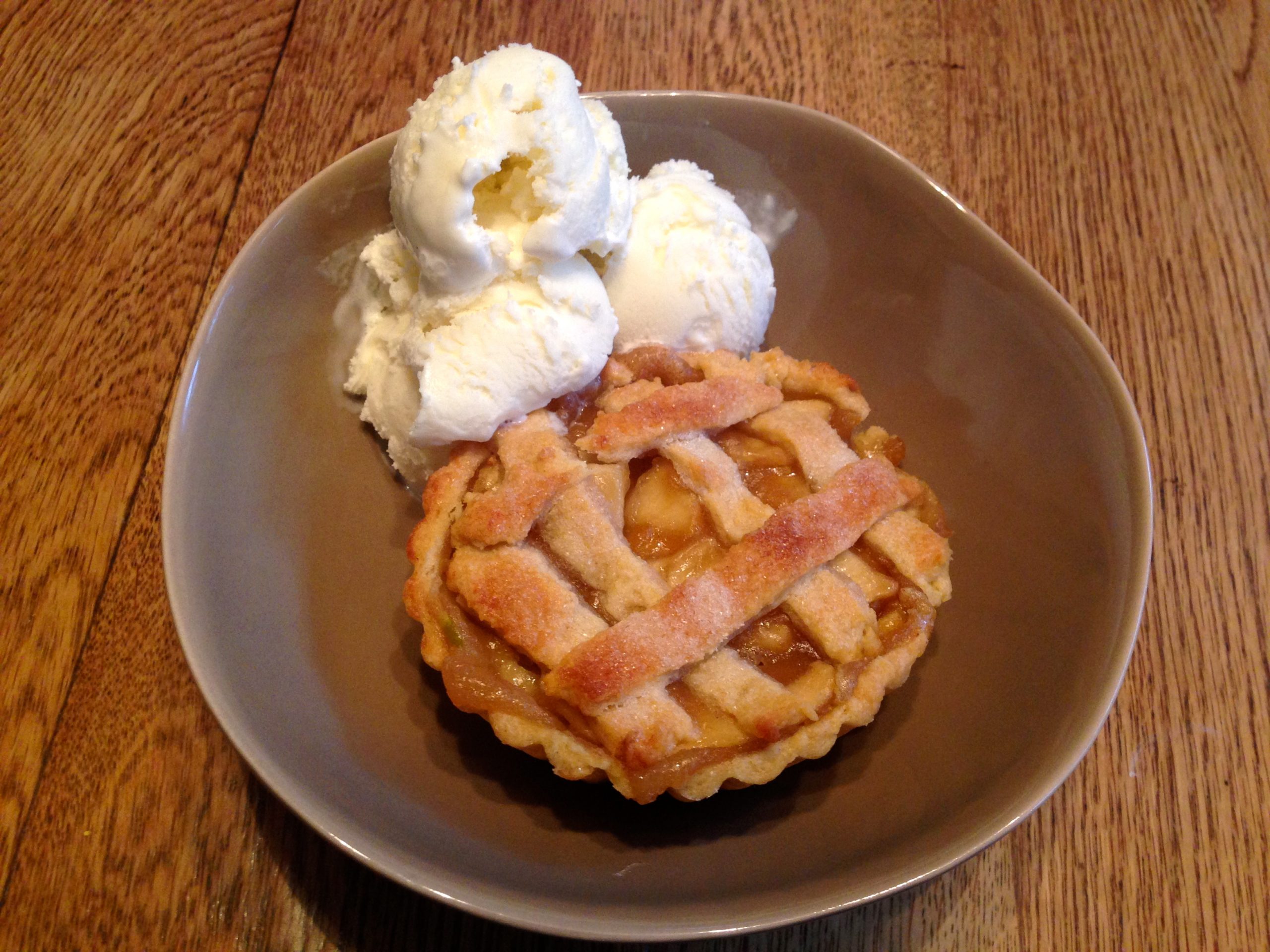 You can freeze an entire apple pie for another day. Top with the second crust, but dont brush with egg/milk or sprinkle with sugar. Put the pie in the freezer for an hour to flash freeze, then wrap with plastic wrap, and wrap it again. Then wrap in foil. Freeze for up to 3 months.

You can bake it straight from frozen. Brush with egg/milk, sprinkle with sugar, and pop it in the oven according to the recipe. Add about 20 minutes to the total bake time, and remember to cover your pie toward the end so it doesnt burn.

And thats it! Now you know how to make an epic apple pie! Here are some other recipes that might be useful:

I’m sharing this in collaboration with my good buddies Megan from Simply Rooted Farmhouse and Dusty from Linen and Wildflowers. We wanted to get together and share our most treasured, favorite, family recipes for this holiday season. You can check out their delicious recipes at the end of this post!

My mom’s apple pie is THE APPLE PIE at our family Thanksgiving table. It’s not too sweet, the apples still taste fresh, and there is just enough cinnamon to make it warm and cozy, without overwhelming the sweet apples. The homemade apple pie filling is then encased in my dad’s flaky pie crust and baked until golden brown and delicious.

This apple pie is served every year at Thanksgiving. My mom made it for well over a decade before teaching and eventually passing it on to me.

Now that I’m on my own and have my own family, Thanksgivings are now hosted at my house. The dinner menu changes year to year, our families grow and change from year to year, but no matter what we’re having for dinner, or how many people are coming, one thing’s for certain–the apple pie will be there.

I wrote a huge post all about pie crust! This basic apple pie recipe is a staple in our house and I hope you love it. You can find this recipe plus SEVEN other pie recipes in one post if you are looking around for something that looks perfect for your Thanksgiving table.

Theres something magical about pulling a pie made from scratch out of the oven. It seems to take you back to a time when life was simpler and homemade pie was standard fare in American kitchens.

Plan to take an afternoon to bake and you just might love how grounding the whole process is for you. And youll have a beautiful pie to enjoy after dinner or to share with friends, and thats a pretty great reward, too.

How to Make Our Favorite Homemade Apple Pie From Scratch

Its taken us a while to zero in on our favorite method for making apple pie, but I think weve finally nailed it. This simple recipe guarantees perfectly cooked apples surrounded with a thick gently spiced sauce. Theres no need for precooking the sauce or apples and the steps to make this pie are simple, you just need a little time.

As with all of the pie recipes on Inspired Taste, we start with this homemade pie crust. Im a stickler on this one. It has never failed us and is our go-to recipe for pumpkin pie, tarts, and other fruit pies like blueberry pie.

You can make the crust in advance. It can be refrigerated or frozen. Definitely check our pie crust recipe for our tips on making it .

As for the apples, we use a lot of them and like to use two or more varieties for the most apple-flavored pie. Ive listed some of our favorites below. It isnt a complete list, but it should give you some inspiration when shopping for your homemade pie. If you find yourself with extra apples, try making homemade applesauce!

We dont precook the apples before adding them to the crust.

Instead, we toss peeled and sliced apples with sugar, salt, and spices in a large bowl. When the apples are well coated, we set the bowl aside and let the apples sit for about an hour.

In this hour, the sugar and salt work on the apples to help them release their delicious liquid . The apples also soften quite a bit. We do this when making apple bread, too.