There are a few key ingredients to ensure this Sweet Potato Pie recipe turns out perfect:

What Equipment To Use

To make a sweet potato pie, you will need a mixer! You can use a hand mixer or a stand mixer, either will do. This recipe could also be made by hand using a whisk or wooden spoon. However, it will take some arm muscle to mix the ingredients together until creamy. I love using my KitchenAid Stand Mixer to make things easier, but I have made it with a hand mixer as well.

Yes, you can freeze it! Freezing works best with a baked pie. After baking, cool the pie completely, wrap it in a couple of layers of plastic wrap and then in foil. Freeze for up to one month.

Defrost in the refrigerator for several hours or overnight. Bring to room temperature before serving .

Leftover pie will keep for up to four days in the refrigerator.

Sweet Potato Pie is a classic southern dessert thats irresistible! Made with simple ingredients and warm spices in a buttery crust, this pie is perfect for a weeknight meal and is a MUST on your holiday table.

With Thanksgiving right around the corner, Im starting to test drive a few recipes just to make sure the flavors are right and this pie has made the cut.

Assemble And Bake The Pie: 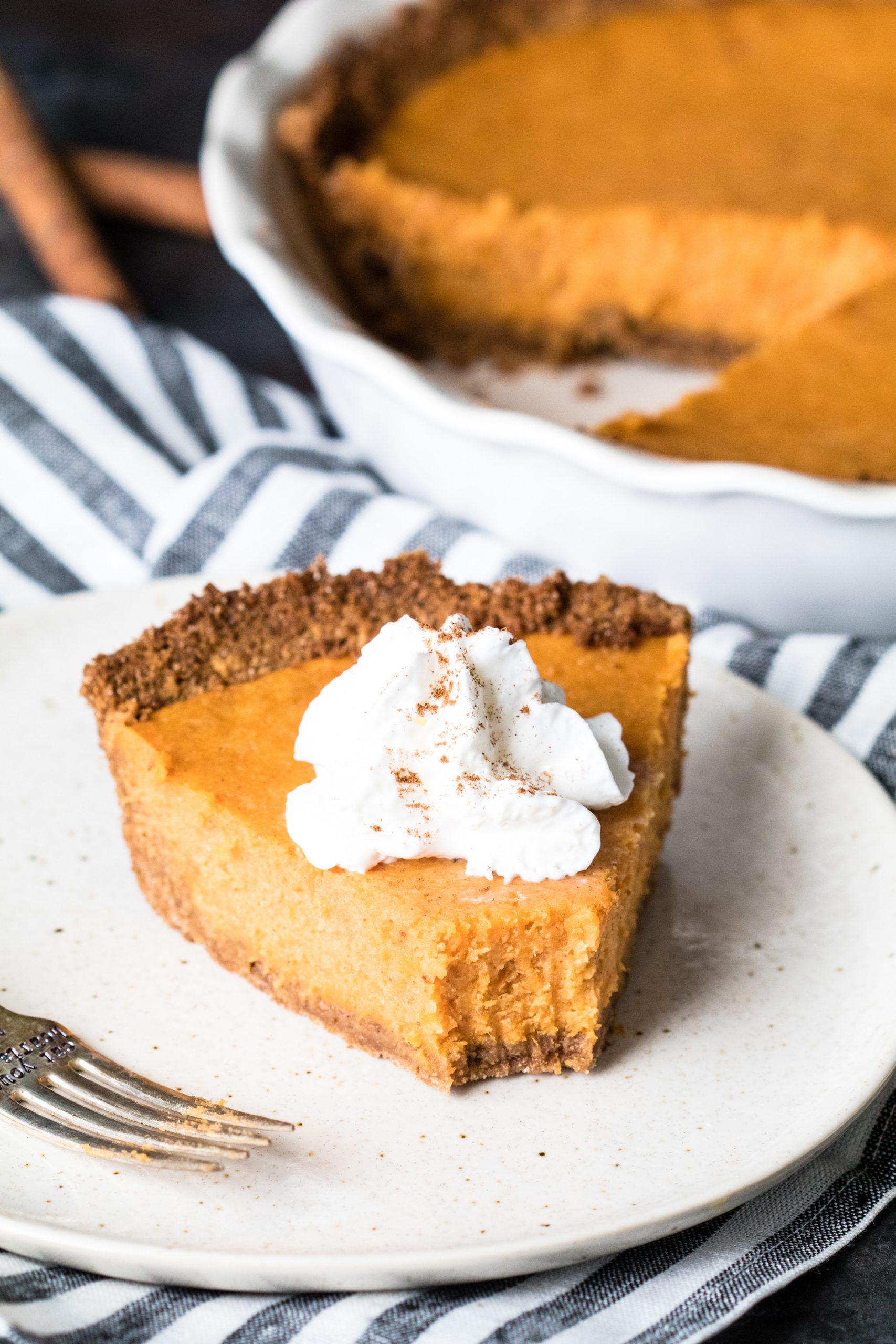 Pour the filling into the prepared crust and set on a baking sheet.

Bake the pie for 10 minutes at 375 degrees F, then reduce the heat to 325 degrees F and continue baking until cooked through about 50 minutes. The center should jiggle slightly when you shake it.

Check the pie during baking. If the crust is browning too quickly, place a pie crust shield on the edges and continue baking as directed. When the pie is ready, remove, and let cool completely.

Sweet potato desserts are absolutely amazing and I love swapping out traditional pumpkin with sweet potato. Sweet potato pie seems to be more popular in the south however, my northern family members have definitely been converted after eating this pie! This particular Sweet Potato Pie recipe is one that has been perfected over the years to get the spices just right. In addition, I’ve also started making it easier by microwaving the sweet potatoes rather than boiling or baking them. Also, if you enjoy pumpkin pie then you will certainly enjoy this pie since the texture and spices are similar. If you are looking for that flavorful dessert to impress your guests this year, then you need to make this Sweet Potato Pie recipe.

Now, it is time to make the pie filling.

Start by placing the sweet potatoes in a large bowl. Then add all of the other ingredients except for the pie crust.

I like to included cinnamon but nutmeg is also great to include.

Mix everything together until it is combined really good with an electric mixer.

This mixture is ready to go. Just pour into your pre-made pie shell.

How To Prepare The Sweet Potatoes

There are a couple of different ways to prepare sweet potatoes for the pie. The method I use most often is baking. You can also use an air fryer which is a great way to make sweet potatoes.

Bake In The Oven

Heat oven to 425 degrees. Wash the sweet potatoes and poke several holes using a fork. Place potatoes on a baking sheet lined with foil or parchment paper. Bake for approximately 45 minutes until potatoes are tender. Scoop out cooked potato and place it in a bowl to cool.

Peel the sweet potatoes and cut into chunks. Add the potatoes to a large pot and cover with water. Bring the water up to a boil then reduce heat to a low boil and cook sweet potatoes for about 40 minutes until tender and cooked through. Drain and set aside to cool.

Sweet Potato Pie is a delicious southern classic and one of my favorite pie recipes! Its simple, creamy and delicious and is absolutely perfect in the fall or anytime! This pie recipe is a family recipe passed down from my great grandmother. Its a favorite at family suppers during the fall and has always been a part of my familys Thanksgiving dessert table!

Why Sweet Potato Pie Is A Southern Staple

Adrian Miller, a James Beard award-winning author, addresses the love of Sweet Potato Pie in his book Soul Food: The Surprising Story of an American Cuisine, One Plate.

Miller says Sweet Potato Pie is just one of those foods that evoke deep, deep nostalgia for either family situations or communal situations.

Its a taste of home, he says. Its a taste of church. Its the taste of family reunions. You know those settings where you can kind of escape from everything else thats happening in the world. Youve got this bond, youre feeling the love.

He continues to explain that while sweet potato pie is important. Its more than that. Its about how it makes one feel.

Cooking is an act of love, he says, at the most basic level. Somebody is saying they care about your survival. I think sweet potato pie means that to a lot of people.

As far back as the 16th century, sweet potatoes were being shipped from South America to Western Europe and Africa. In Europe, sweet potatoes became increasingly popular, and locals created a dish known as sweet potato tarts. When colonists came to America, they continued to make this dish.

Over time, the sweet potato tart garnered the most fans in Southern states because they were easier to grow than pumpkins .

As stoves became more attainable to households around the nation, and processed ingredients like sugar became more accessible, the idea of making formal desserts quickly spread, leading to the sweet potato pie that we know today.

So, while pumpkin pie may be the one thats often considered traditional for Thanksgiving , my theory that sweet potato pie deserves serious consideration for the T-Day spotlight does have some historical backing when you look at the origin of sweet potato pie.

The old fashioned sweet potato pie is a classic dessert to enjoy during the fall months and a great alternative to pumpkin pie for Thanksgiving. It features a smooth and creamy sweet potato filling with warm spices on top of a flaky crust. Serve with whipped cream, and enjoy!

While pumpkin pie is usually the queen of a successful Thanksgiving party, sweet potato pie is another classic not to forget on your dessert table. This old fashioned version is a no fuss recipe, using natural, plain ingredients, Grandmas style! Its equally simple to prepare, sweet and delicious, and is sure to impress family or friends. Its also a great alternative to anyone who doesnt like pumpkin.

How To Make The Best Recipe For Sweet Potato Pie:

Begin the recipe by preheating the oven to 350 degrees F. If you are using frozen pie crust remove now is the time to remove them from the freezer and allow them to sit at room temperature while preparing the sweet potato pies. You will need two pie crusts for this recipe.

Clean the sweet potatoes, peel off the skin, and cut them into large chunks. Place in a large pot and cover with water. Bring the sweet potatoes to a boil over high heat and allow them to cook until fork-tender, about 10 minutes.

Drain the water off the sweet potatoes and add them into a stand mixer bowl or large bowl to use a hand mixer. Add the butter and mix on medium speed until combined.

Adjust the mixer speed to low and add in the sugar, milk, ground cinnamon, ground nutmeg, and vanilla extract. Mix until combined. Add in the two eggs and turn the mixer speed back on medium and mix until smooth. If there is still a few chunks of potato in the mixture, it is fine.

Turn the mixer off and slowly add the filling evenly into the two pie crusts. Place into the oven to bake at 350 degrees F. for 55 to 60 minutes or until lightly browned.

Allow the pies to cool before serving. Serve and Enjoy!

If you are making the pie crust, I would recommend making the dough the night before because it needs to chill in the refrigerator for at least 2 hours before rolling out.

I like to press the sweet potato mixture through a large sieve to eliminate some of the fibrous strings you find in some sweet potatoes and ensure a smoother texture.

During bake time, if you find the edges of the pie crust are browning too quickly, apply a pie crust shield or a ring of aluminum foil to protect it.

How To Make Sweet Potato Pie:

Add in the butter and mix until combined.

Next add the eggs and mix until smooth.

Place the pie crust into a pie plate and crimp the edge.

Add the filling and smooth out the top.

Bake for 45-50 minutes until set. It might be the slightest bit jiggly. It is ready when a butter knife inserted into the center comes out mostly clean. Or, an internal temperature reaches 175°F.

Finally, let the pie cool to room temperature before slicing to serve, or chill first.

. Since I cant let well enough alone, I topped the pie with a fluffy cloud of marshmallow whipped cream. Its creamy, puffy, not-too-sweet, and puts marshmallows where they belong: on dessert.

Toasted Coconut. Last, since Im a bit of a texture freak, I couldnt resist adding a little crunch. Toasted coconut flakes, while optional, put this pie squarely over the top.

Not a coconut fan but craving texture? Try topping your sweet potato pie with toasted pecans.

How To Make Sweet Potato Pie From Scratch 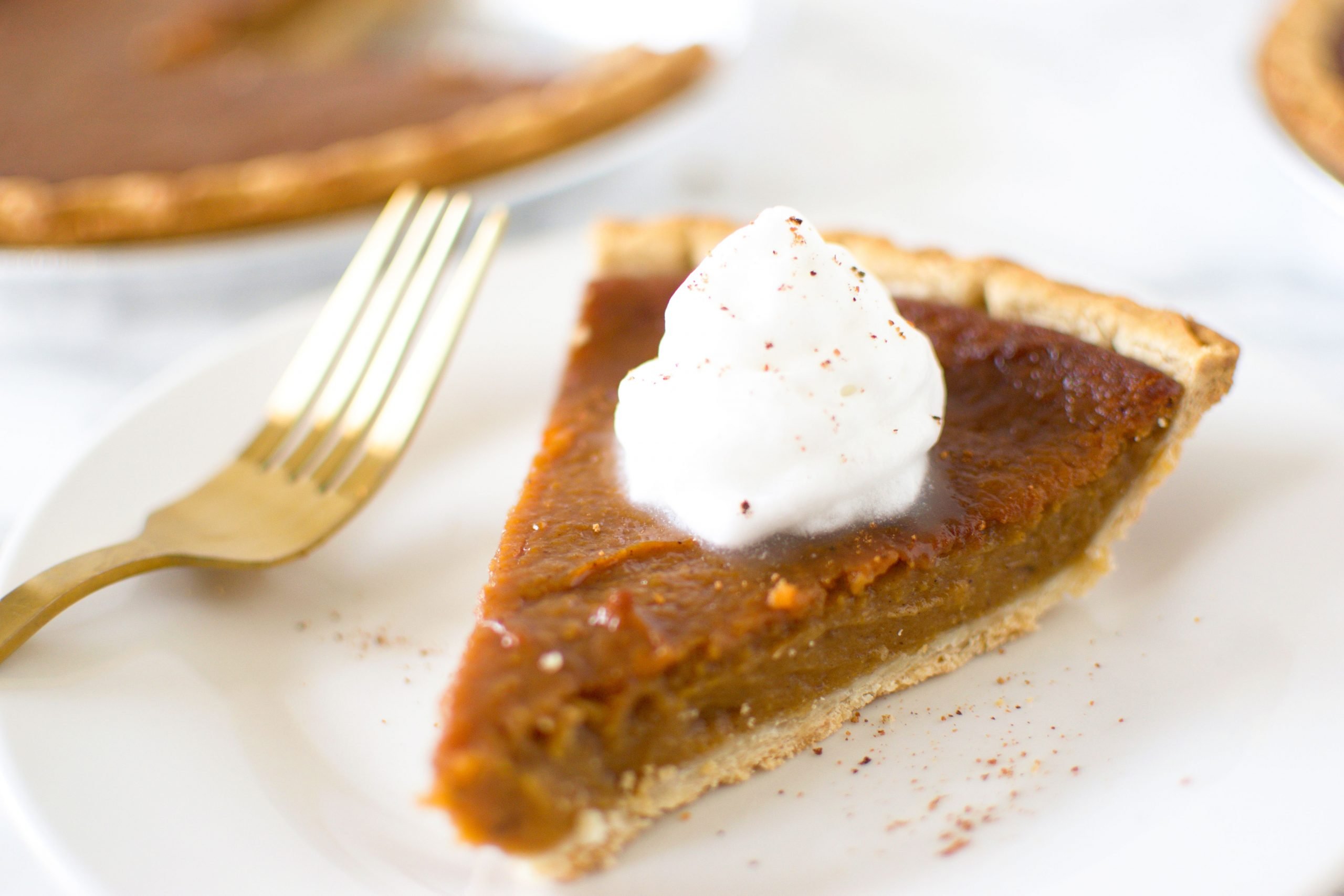 This sweet potato pie is easy to make! Heres how you do it: