How To Make Pot Pie Crust

How Do I Know When Chicken Pot Pie Is Done

For this recipe, you will know when your chicken pot pie is done cooking by looking at the crust. If it has begun to turn a lovely golden brown, then it is finished. This recipe allows you to cook the filling on your stovetop before it bakes in the oven so that you will not have to worry about a raw pot pie.

When it comes to baking pies, the most daunting part of the process is making the perfect flaky crust. After all, you want a great foundation to hold all those delicious fillings. But once you master the technique for how to make pie crust from scratch, you can whip up flaky homemade crusts that everyone will be talking about.

Our copycat banquet pot pie recipe is loaded down with your favorite meat and veggies, then encased in the perfect flakey pie crust that tastes like it is melting in your mouth. Learn all about how you can make your very own homemade version of this pot pie, as well as a few shortcuts to make it manageable for everyone no matter what your cooking skill might be.

When the dough is ready, youll roll out the bottom crust, lay it in the pie dish, and add your filling. Then, roll out the top pie crust and cover your pot pie with it, bring the bottom crust up and over the top, pinching the two together to enclose. For an extra golden crust and a special touch, brush the pie crust with egg wash and sprinkle with Kosher salt.

Once baked, it will be perfectly golden, flaky and buttery, and the perfect addition to the best chicken pot pie recipe. 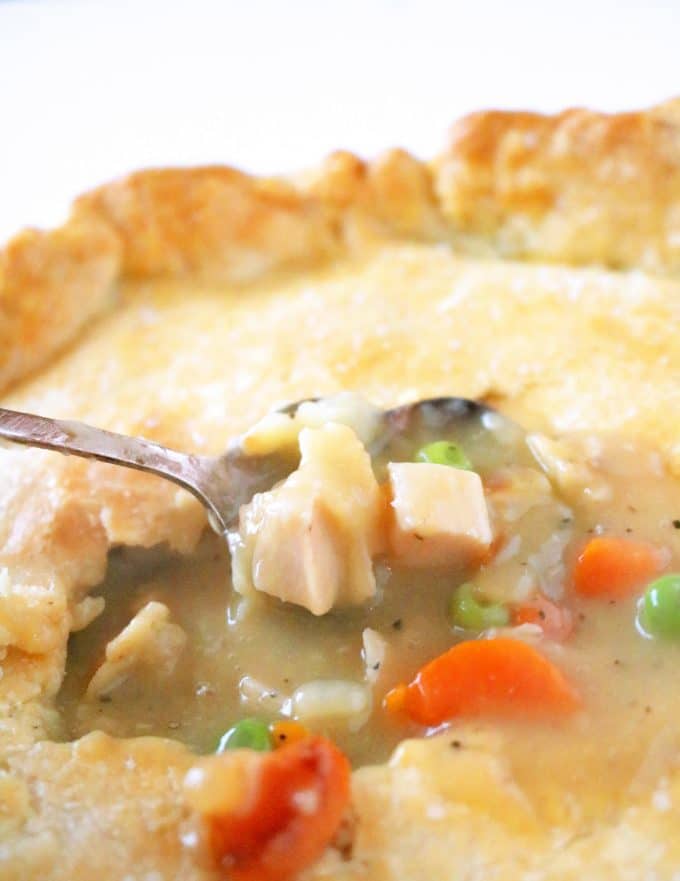 To make a turkey pot pie casserole, you will prepare as instructed above only use turkey broth in place of chicken broth and replace your cooked chicken with pre-cooked turkey. To make this a casserole, you will want to use a casserole dish instead of a pie plate. Top with the crust, or with biscuits. You can also purchase, biscuits, canned crescent rolls, canned biscuits, or pie crust to use as a topping if desired.

How To Make Homemade Pie Crust

If you are planning to use refrigerated pie crust, skip this step.

In a large bowl, mix together the flour and salt.

Add in the cold butter and shortening, and cut it in using a pastry cutter, fork, or your hands.

Continue mixing the butter and shortening into the flour until it is incorporated into pea-sized pieces.

Gradually add the ice water to the mixture stirring until a dough begins to form.

Lightly flour a clean surface, and turn the dough out onto the surface.

Sprinkle a bit of extra flour on top of the crust, then knead 2-3 times to incorporate fully.

Sprinkle with additional flour as needed, then roll out placing one circular piece in the bottom of the pie plate, and reserving the second for topping the pie after the filling is made.

I dont know about you, but on rainy, gloomy days, I crave something warm and comforting. This homemade chicken pot pie does just the trick!

I like to think of this EASY chicken pot pie as my own simplified version of the comforting, cozy childhood favorite that my mom served to our family on a regular basis when I was growing up.

It was one of our most-requested cool weather dinners and Im now continuing that tradition with my family but with much less work on my part! Plus, simple recipes like MY chicken pot pie recipe allow me to spend less time in the kitchen and more time with the ones that I love.

And although homemade pot pie might not be as convenient as store-bought, believe me when I say it is so worth it! And once you try this pot pie recipe, youll never turn back!

To make a chicken pot pie crust from scratch, youll whisk together flour, and salt, cut in cold butter and shortening using either a pastry blender or your food processor, and then drizzle in ice-cold water. Mix until a dough has formed, divide into two discs , and transfer to the refrigerator to chill.

How To Transfer Pie Dough To Pan

After the crust has been rolled out, there are a couple ways to transfer the dough to the pie pan.

I was wondering how to make the breading/crust on the top of a chicken pot pie really crunchy, not flaky, but crunchy and crispy.

I know all the ingredients to make the topping in the first place. I just don’t know what to add to give it that extra crunch. I don’t know if anyone has had the pot pie from KFC, but I want my topping and sides to be that crunchy.

Can anyone help me?

Just a thought, you might like to swap your normal breadcrumbs for “Panko” Japanese crumbs, these crisp up more efficiently with tiny dots of butter on top. The other trick I often do for crispy breadcrumb toppings, is to add a small amount of dry couscous to the mix, before baking.

What kind of ingredients are you using in your current crust topping? Usually the addition of a bit of butter will add to the crunchiness a bit, that would be my first suggestion.

I am going to assume that you used pastry for the crust of your pot pie.

If you’re making a pie recipe that calls for prebaking your pie crust, follow these additional directions once your crust is in its pie plate, with that pretty edge you worked so hard to create. 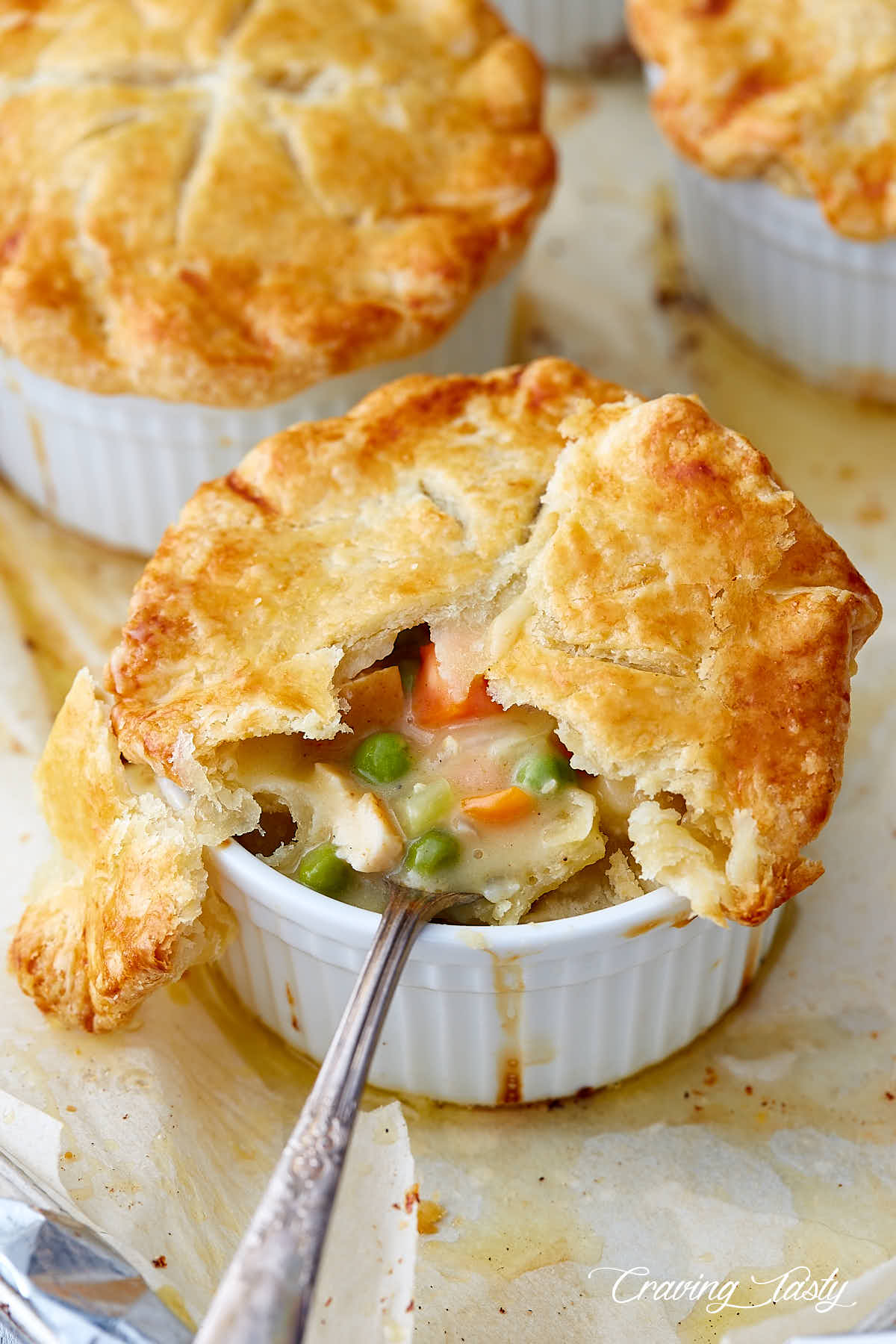 If you are looking for an old fashioned, traditional chicken pot pie, made from a whole chicken, freshly cut vegetables, and a flaky homemade crust, this is it!

This chicken pot pie recipe is also known as “Mrs. Hering’s Chicken Pot Pie” in the , from the famed Chicago . First introduced to customers in 1890, it was this Marshall’s chicken pot pie that launched the dish into our national consciousness.

Prepare The Pie Dish And Add The Bottom Crust

I bet you’ve already got all of those simple ingredients . Melt butter in a large skillet. Preheat the oven to 350 · place bottom pie crust in the pan and bake for 7 mins, remove and set aside. · prepare the pie dish and add the bottom crust. Get easy chicken pot pie recipe from food network. · mix in the veggies, chicken soup, and milk, cook until heated through. Add the shortening and butter and use a pastry . Brothy gravy, golden crust, and tender, flavorful vegetablesit doesn’t get much better than this recipe for chicken pot pie. Add flour, poultry seasoning, salt and pepper. Ingredients · 1 homemade pie crust, · 4 cups cooked chicken, shredded* · 6 tbsp unsalted butter · 1 medium yellow onion, . Slowly add chicken broth and milk, cooking . 1 store bought pie crust, unbaked and thawed if frozen. · heat olive oil in dutch oven on medium . Ingredients for a homemade pie crust. To make a homemade crust for chicken pot pie, combine the flour and salt in a medium size bowl.

The vegetables will be cooked in two steps. First, take the carrots, corn and peas and place them in a pot and fill it with enough water to just cover the veggies. Heat it over medium heat until the veggies are tender . Drain them and combine them with the chicken in a bowl.

Add the flour, seasonings and herbs to the sauteed veggies and butter and stir continuously for 30 seconds. Slowly pour in the broth and milk stirring constantly until the mixture thickens. Add the sauce to the chicken, corn, carrots and peas and mix everything together.

If youre craving comfort food, homemade chicken pot pie is your answer! This completely from scratch recipe is simple to prepare, features a double crust, and nourishes the soul. For step-by-step photos, scroll to the bottom of this page.

When Im craving a meal thats truly comforting, this double crust chicken pot pie recipe hits the spot. It satisfies the soul and, is surprisingly simple to throw together. Well use my favorite homemade pie crust recipe for a sturdy crust on the bottom and a golden brown, flaky cloak on top. In between the pie crust layers is a mixture of chicken and veggies topped with a creamy, rich white gravy that is flavored with a little cooked onion, salt, pepper, and thyme. Lets get started!

Amish Chicken Pot Pie is a staple in the Pennsylvania Dutch community. Brothy and full of flavor, the homemade noodles add texture and body to this stew. Once you try it, youll never want gravy-style crusted pot pie again!