All The Keys To A Great Pie

Making a great key lime pie isnt rocket science. So why is finding an authentic key lime pie such a difficult task?

The answer is really quite simple. Too many bakeries and bakers cut corners, using a pre-made crust or bottled juice from concentrates, mechanizing every aspect of production in order to optimize the bottom line, or because a key lime pie is just another offering in a long line of products.

Seeds Seeds Seeds: Theyre A Natural Byproduct If Youre One Of Only Two Commercial Bakeries In The Us Juicing Fresh Key Limes As Your Source For Juice

Some time ago, when Steve was having a conversation with key lime pie authority and writer David Sloan the mastermind behind the annual Key Lime Pie Festival and long-time admirer of Steves devotion to key lime excellence and authenticity the subject of sourcing local key limes in Key West came up, Theyre just not that easy to come across any more Sloan told Steve.

Hurricane Irma had done a good job of wiping out many Key lime trees from an already dwindling population. David and Steve chatted about that unfortunate scenario for a bit, David might have even made a Johnny Appleseed reference, and thats when I came up with the idea. Why not help put some key limes back in the Keys?

As many of you know, Steve began making key lime pies growing up in South Florida decades ago, and commercially here in Brooklyn about 25 years ago. But unlike most bakeries Steve has always made them the old-fashioned way: were using real, fresh squeezed key limes as our source for juice.

We started off offering free key lime seeds to any resident living in the Florida Keys just for the asking. But the seeds were crushed in the mail-processing and frankly, weve never grown a single key lime tree from dried seeds, always from fruit to ground. Add to that, we just found ourselves overwhelmed with collecting names and addresses, putting the dried seeds in small envelopes then bigger envelopes. As well intended as we were, it just wasnt working.

You’ve probably indulged in the best key lime pie in NYC at one of the restaurants it’s served in, or at a grocery store where it can be purchased . But after a bike ride down Van Dyke St., you will be rewarded by a KLP covered in Belgian dark chocolate and served on a stick – The Swingle. You’re welcome. The building, like many other locations in Red Hook, is situated right on the water looking directly west, featuring another pier and park that offers beautiful view. Treat yourself!

It Seams That Key Lime Pie Itself Has A Waterstory 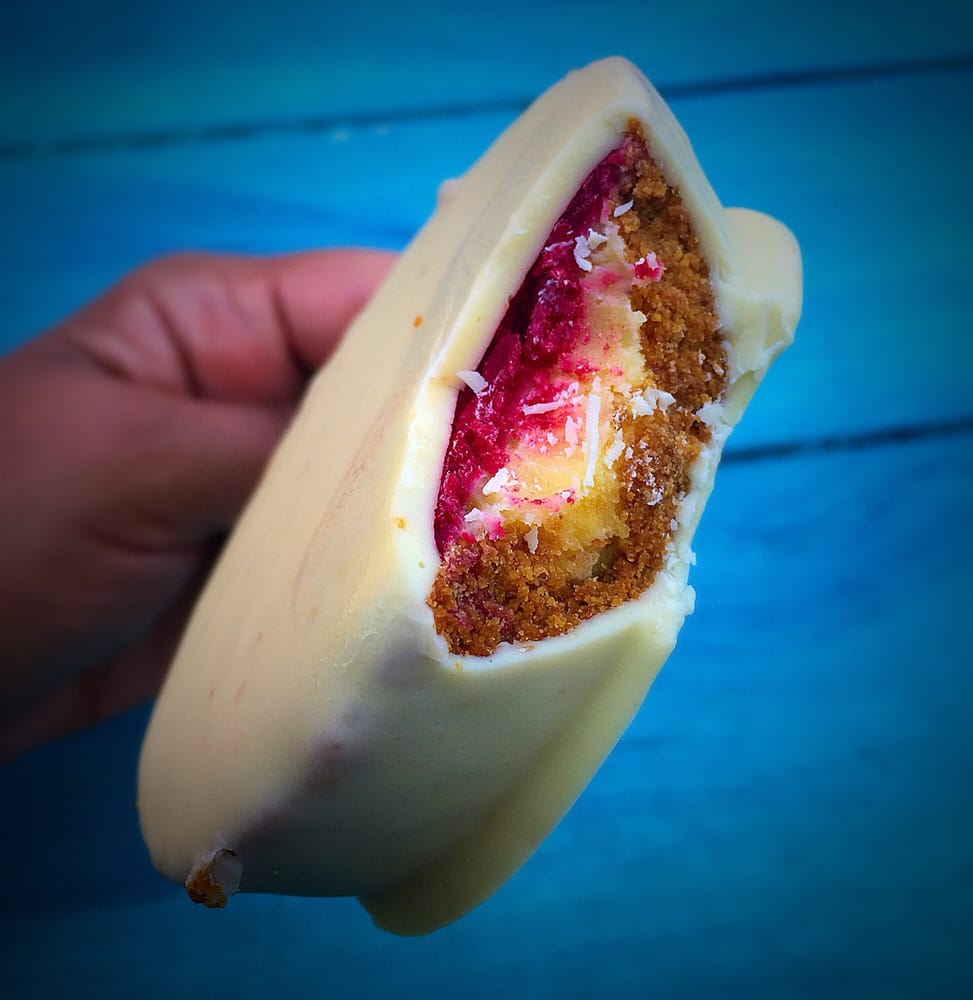 In a conversation with PortSide NewYork about the key lime pie’s watery beginnings David Sloan replied: “Like many things in Key West, the sponger origin was something people in town just knew but didn’t see much importance in recording. Monroe County Historian Tom Hambright was the first I know of to put the idea in writing. Local chef, distiller and Key lime lover Paul J Menta tracked down the oldest sponge fisherman he could find and talked with him to confirm the process and tradition. An important part of this equation is that condensed milk and lime juice were used to not get sick. They added condensed milk to coffee and used limes to cook fish, but they were known to maintain good health. I believe the lime was added to the condensed milk to mellow the puckering effect of straight lime juice. Why condensed milk instead of water or coffee? They probably looked at it as taking all of their vitamins at once and getting it out of the way.”

Today, we are committed to recreating that very key lime pie I once made for my family and my friends, and making it with the freshest ingredients we can. We’re not cutting corners, we’re not looking at changing the basic five-ingredient recipe, and we’re certainly not looking to minimize costs at the expense of the authenticity and integrity of the product. A number of years ago, while my daughter and I were vacationing in the Keys, I visited what was the most popular key lime pie shop in Key West. The proprietor of the bakery and I were chatting about business, since we are all somewhat aware of one another. I was amazed when I mentioned the raising cost of butter , and he asked why are you buying butter?

Where To Find The Best Damned Key Lime Pie In Brooklyn

When youre far away from you grew up, getting the occasional taste of your roots isnt just comforting, its a must. And with the weather having finally reached optimal summer temperatures, it would be no surprise if all Brooklyn-based Miamians were craving one thing in specific: a slice of Key lime pie. After all, key limes are the pink flamingos of Florida foodan integral and nationally recognizable part of our culture. And while maybe the creamy texture and tart but sweet flavor isnt for everyone , there is probably no treat more suited to satisfy your summer sweet tooth than the Key lime pie.

But though the Sunshine State is at another corner of the country, you can still snag a refreshing slice or entire pie here in Brooklyn. But take note Brooklynites: Not all Key lime pies are created equal. Some are more tart than others, causing an unfortunate occurrence of spontaneous duck face, while still others sport an alarmingly funky green tint, instead of the more natural mellow yellow custard. But so you wont be treading through Brooklyns Key lime pie scene alone, as a Florida-native, Im here to guide you through the six best and, frankly, worst pies in the borough.